The girls are back to school, the outdoor pool at the Y is closed for the season, I spied turning leaves way up in the trees this week so you know what that means…it’s closing on fall and that means time to start up the projects.  It’s not that we don’t have projects in the summer too…there has been brewing and woodworking for Charlie and sewing for me and the girls had the pain of assigned summer reading (seriously… The Scarlet Letter and The Red Badge of Courage…in the same summer??) .  During the summer, there is more hang out time and lots of nothing, which is the way it should be…it’s also hot and even though we are lucky enough to have central a/c for the super hot days, I’d much rather spend summer days outside or hanging out than taking on a project.

Well project season has officially begun at our house.   Last weekend, Charlie re-placed the doors to our little shed where we keep the trash can and the snowblower/lawnmower in their off seasons…a creature I don’t want to run into in the dark had chewed through the bottom of the rotten door to chew through the trash can to get to the trash.   Yay Charlie for tackling that project!   I have also started the big project that I’ve been putting off for 4 months…painting the railing on the back deck…but that is another post for another day.

Today I wanted to share the project that was planned, executed and completed last week with a minimum of fuss and craziness (how often does that happen?)  My pal Sara and I canned and froze 40 lbs of peaches. Yes, 40 lbs.

The inspiration for this canning craziness was the 5 cases of canning jars that we were gifted by my mother-in-laws neighbor (at least a dozen turned out to be empty mayo jars but this is what we have left after the sorting)… I ordered up two boxes of large organic peaches from my farm coop, picked them up and two days later we were canning and freezing.  Yes, 40 lbs.  Sara came over last Thursday and we got to work boiling jars, skinning peaches, slicing and canning.  I think we used every bowl in the house.

The actual “canning” part of the process involves filling the jars with the cut up fruit, then adding the sugar syrup then processing the jars in a water bath for 30+ minutes …. Thank Goodness for the “Ball Blue Book of Canning”  Grand Tally?  13 quart jars canned and 8 quart bags frozen peaches… ready to eat during those long cold days of winter! 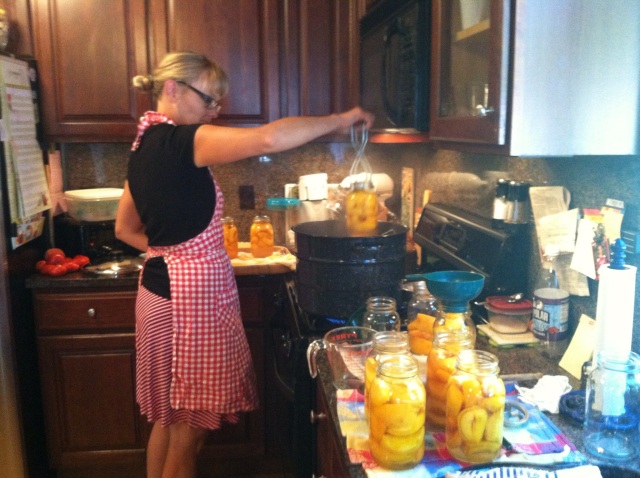 If you’ve never “canned” before, it’s really very easy.  Sara and I laughed when we thought what our Grandmothers and Great-Grandmothers would think of us taking most of the day to to 13 quarts of peaches…they probably did that before breakfast!

Hope you’re all having a great week and starting and finishing some of your own projects on your list!